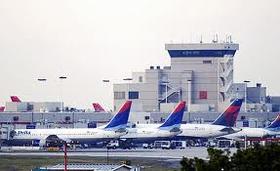 Is Atlanta’s Hartsfield-Jackson International Airport at risk of losing its title as the world’s busiest airport?

According to officials in Chicago, Atlanta’s decade-long reign – at least by one measure – may be coming to an end.As heard on the radio

According to the Federal Aviation Administration, O’Hare recorded more than 585,517 takeoffs and landings From Jan. 1 through the end of August, compared to Hartsfield-Jackson’s 582,138.

But Hartsfield-Jackson spokesperson Reese McCraine said the year’s not over yet.

“As we approach the winter months, the airports and cities in the Northeast and Midwest usually have harsher winters than we do here in Atlanta, and that will impact their overall flight operations,” he said.

But compared to the same time frame last year, FAA data show arrivals and departures are down about five percent at Hartsfield-Jackson, whereas O’Hare’s numbers have stayed about the same.

McCraine said that’s due to the consolidation of routes after the Southwest and AirTran merger and hub carrier Delta moving to larger aircraft.

And that brings up another way to measure how busy an airport is: total number of passengers.

By that measure, Atlanta’s still handily on top with more than 94 million travelers last year.