A church torn down for the construction of Mercedes-Benz Stadium has a new home.

The congregation of Friendship Baptist Church celebrated Sunday, starting with a walk from the old site to the new.

Fifty or so people joined the march, beginning at Mitchell Street, where Friendship Baptist stood before it was demolished three years ago.

While singing, the churchgoers walked the few blocks to their new building. 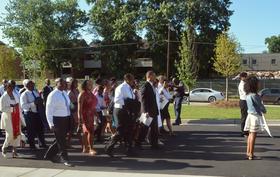 The Rev. Frances Bryant-Lowery said it’s hard to put the feeling of this day into words.

“We’ve been in a holding pattern for so long,” Lowery said. “It’s just so exciting that we’ve gotten to this point.”

The church is the oldest black Baptist congregation in Atlanta and it has strong ties to the nearby black colleges.

At the day’s ceremonies, Kenneth Crooks remembered visiting the church as he got started in the civil rights movement.

“It’s an emotional feeling that I have that relates to my spiritual growth and development and Friendship had a lot to do with that,” he said.

That community bond is why the last few years have been hard, members said.

The Rev. Ralph Phillips recalled the church’s demolition as taking something away from the city.

“Well it was heartbreaking because I’m from Atlanta,” Phillips said. “To see it be replaced for a stadium or sporting event, it was kind of tough.”

Still, he and others at the church have come to terms with the move: it’s progress.

For the church, too, said Webster Pope. Pope pointed to its first location after the civil war: a boxcar.

“We’ve come a long way since the boxcar. It’s marvelous facility that we have now,” Pope said.

The church received $19.5 million to give up its home for the new Falcons stadium.

As the marchers arrived at the 44,000-square-foot, state-of-the-art building on Walnut Street, Pastor Rev. Richard Wills prayed. And the church sounded its 146-year-old bell.

Then, hundreds more filed into Friendship Baptist for the service.