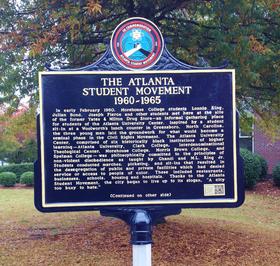 Atlanta is full of historical markers. You’re bound to pass by a few of the standing bronze signs on any drive around the city.

But surprisingly, there haven’t been many markers recognizing Atlanta’s role in the civil rights movement. At least, until now.

A set of new markers went up in this month to tell the story of the Atlanta Student Movement, which Atlanta University Center students started just after the Greensboro sit-in in 1960.

There is some archived footage of former Georgia Gov. Ernest Vandiver, including his remarks about the document (below) published by these Atlanta Students in the Civil Rights Digital Library. You can also find photos of young Atlanta civil rights protestors in the Atlanta History Center’s collection. 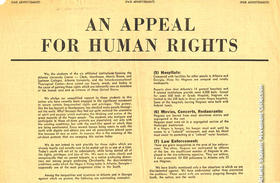 And, by the way, these markers are just the beginning. The Georgia Historical Society is planning a statewide civil rights trail and Council Member Michael Julian Bond hopes to add more markers around the city in 2015.