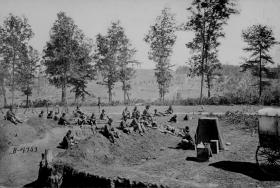 This week marks the 150th anniversary of the surrender of Atlanta during the Civil War, and while many battles took place inside of the city, you might not be able to tell by just looking around.  That’s because of all the sites of major Civil War engagements, Atlanta is the only one without its battlefields preserved.

Scott Peacocke wrote about the reasons behind this for the Atlanta Journal Constitution’s series War in Our Backyards. He recently stopped by to speak with City Cafe host John Lemley, and they began by talking about some of the places in Atlanta that held major conflicts.

Broadcast version of the story that originally aired on September 4th, 2014.