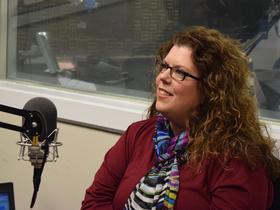 Jennifer Brett, arts and entertainment reporter for the Atlanta Journal-Constitution’s Buzz Blog, has followed Atlanta’s evolving entertainment landscape for years. In a conversation with Rose Scott and Denis O’Hayer in the “A Closer Look” studio, Brett predicted that the film industry will continue to grow.

Brett pointed out that bills currently in the Georgia legislature, including a bill that would lower qualifications for entertainment tax credits and a bill that would extend tax incentives to interactive videogame developers, indicate that the state will continue to woo productions. Noting that these days “anybody with an iPhone now is a publisher and anyone with opposable thumbs is basically a filmmaker,” Brett said she believes there is more than enough entertainment production for Hollywood, California, and the “Hollywood of the South” to share.

Brett said that the expansion of the film industry here in Atlanta has even created a “happy problem” for production companies: not enough local crew members. She predicted there will be more education initiatives for a bigger pool of local behind-the-scenes talent.

Brett keeps tabs on opportunities for local on-screen talent – mainly, people who want extra roles like “Guy in Coffee Shop.” She noted that Ryan Reynolds, People magazine’s “Sexiest Man Alive” of 2010, started out as an extra, so anything is possible.