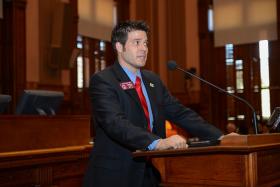 The Georgia House approved a controversial bill aimed at easing gun restrictions in a wide range of places, including bars, churches, college campuses, and Hartsfield Airport.

On the House floor, Rep. Dustin Hightower, R-Carrollton, said the bill is about basic constitutional rights.

“We get asked over and over why do we constantly talk about gun rights and the Second Amendment and my answer is simple – because there are others who are constantly trying to take our rights away,” said Hightower.

Under House Bill 875, gun permit holders would be allowed to carry in bars and churches, as well as local government buildings that don’t already offer security. They’d be protected from arrest if they accidentally bring a gun to the airport. And they’d face a simple $100 fine, rather than arrest, if caught carrying on a college campus. In addition, local school districts would be empowered to arm teachers and administrators in K-12 schools.

The bill was passed 119-56. Prior to the floor debate, House Republican leaders prohibited members from proposing amendments to the bill and set a time limit for debate of two hours – an hour each for supporters and opponents.

Those against the bill argued it would put a significant financial burden on private property owners and local governments. They labeled the bill an election-year ploy.

Rep. Karla Drenner, D-Avondale Estates, is a college professor and said the bill would make her feel less safe.

“The answer to gun violence in schools is not more guns. House Bill 875 is a dangerous bill for our communities,” said Drenner.

Last year similar legislation failed in the final hours of session due to strong opposition from college presidents, who were against a provision allowing campus carry. It’s unclear whether they’ll actively oppose the new bill.

Meanwhile, the state’s main advocacy group for county commissioners has come out against several provisions, arguing the changes will lead to frivolous lawsuits and costly new expenses.

The bill still needs to be approved by the Senate and the governor.