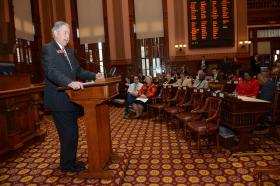 The Georgia House is scheduled to vote on a controversial bill Monday aimed at clarifying state law over the treatment of those on probation for misdemeanor offenses.

House Bill 837 was to be voted on Friday, but it was postponed after administrative issues delayed the filing of a batch of amendments.

Misdemeanors can be anything from petty theft to traffic violations. For offenders unable to afford the associated fine, most go on probation for up 12 months. Georgia is one of a handful of states that depends on private companies to supervise these probationers as they pay off the fine.

Recently, multiple lawsuits have claimed these private probation companies are preying on the poor by charging excessive fees and getting judges to unfairly extend probation periods. In September, a Superior Court judge ruled the practice of extending probation periods by private companies was unconstitutional. That case is currently being appealed.

In the meantime, Rep. Mark Hamilton, R-Cumming, authored HB 837, which would make clear these private companies can indeed extend probation periods in cases where there’s noncompliance and payment delinquency. He says noncompliant probationers must be held accountable.

“This bill right here prevents those people from being able to go and hide with no consequences,” said Hamilton, speaking on the House floor Friday.

But House Minority Leader Stacey Abrams says the bill as currently written leaves too much room for abuse. She says these private probation companies have an inherent conflict due to their profit-motive.

The full House is scheduled to vote on Hamilton’s bill Monday.