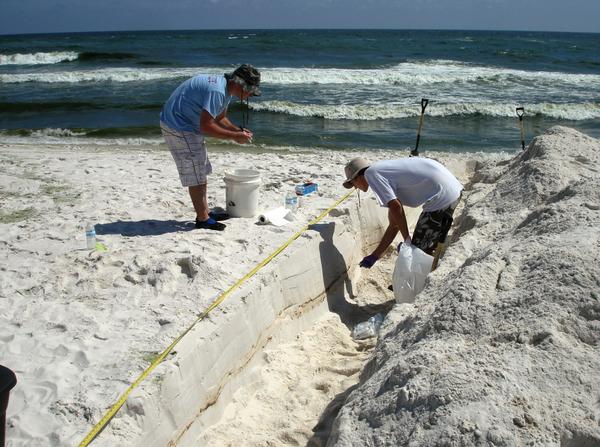 Think the beach gets too crowded during spring break? Be glad you’re not counting microbes. There are a billion bacteria per gram of sand on the beach, according to Joel Kostka, a microbial ecologist at Georgia Tech.

And some of those bacteria eat oil. Kostka and his colleagues have a new paper, describing the communities of bacteria that bloomed after the Deepwater Horizon oil spill in the Gulf of Mexico.

Kostka focused on how the microbes on Pensacola Municipal Beach responded when the oil washed up in 2010. The microbes helped the beach bounce back, he said.

“What we found on the beach is kind of an ideal environment for the growth of hydrocarbon-degrading bacteria, for the growth of bacteria in general,” Kostka said. “It’s very warm, the sand is wet, and when oil comes into the sand, they have plenty to eat.”

Kostka found that different communities of microbes became more and then less common as they ate through the different compounds in the oil.

“The more usable, easy-to-eat compounds are eaten first,” he said.

Then the microbes that ate those compounds faded out, and the ones that could digest the less easy-to-eat compounds that were left became more common.

It’s microbial succession; like forest succession, where a field is colonized by shrubs, then pine trees, then oaks, but on a miniscule, oil-eating scale.

Kostka said this was one of the first times scientists were able to see how the microbes on a beach responded after being exposed to oil. The research could be useful to gauge how other habitats are affected by oil spills.