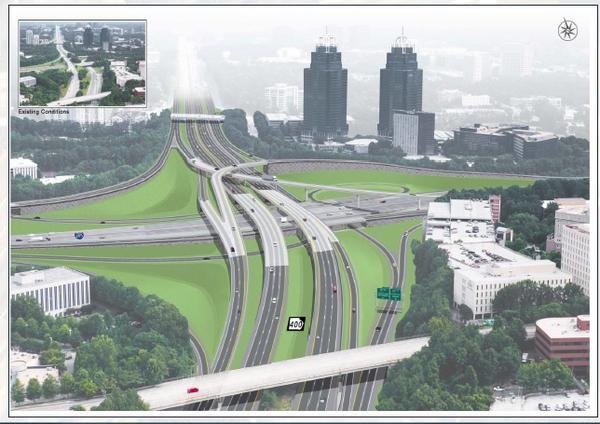 Next year, the Georgia Department of Transportation begins a three year rework of the Interstate 285/Georgia 400 interchange. It promises to relieve congestion along one of the nation’s worst bottlenecks.An audio version of this story, as heard on WABE's Morning Edition

But the plan could already be outdated, thanks to recently-announced development.

For example, State Farm is bringing 3,000 workers to a new building near Perimeter Mall. Across the street, there are plans for a new hotel, 2.2 million square feet of office space and 3,000 new abodes. Not far away is Mercedes-Benz’s newly-proposed U.S. headquarters ─ which will add another 1,000 folks.

“This project was planned years before” these announcements, says GDOT spokeswoman Annalysce Baker.

Baker says the I-285/Ga. 400 rework didn’t account for specific development, but plans did include forecast growth. Currently 221,000 cars travel the route each day. In 2039, when GDOT forecasts it’ll be time to go back to the drawing board; the number could be 357,000, Baker says.

“This project is not meant to be the silver bullet to resolve all traffic issues at the top end of the perimeter,” she says.

If you buy into a theory known as “induced demand,” the answer is “no.”

Induced demand is kind of like the famous line from the 1989 film, “Field of Dreams.” If you build more lanes, magically, more cars appear.

“You’ll never catch up with the demand,” Rod Diridon, executive director of the Mineta Transportation Institute, says. The I-285/Ga. 400 project is a Band-Aid that only delays terminal gridlock, he says.

“Atlanta may be 10, 15 or 20 years away from it,” Diridon says, “but it’s rapidly approaching that level, and it’s doing so because they’re so successful in pursuing jobs.”

In other words, Atlanta’s growth success today could be its downfall down the road.

Diridon says the only real fix is a New York or San Francisco-like mass transit system that incorporates multiple modes of transportation ─ everything from bike lanes to commuter rail.