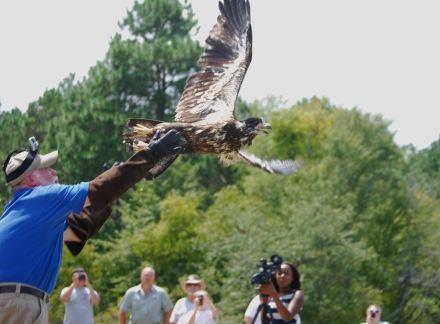 Two injured bald eagles are flying free again after they were found separately in distress this summer: one near Lake Allatoona in northwestern metro Atlanta, the other in Irwin County.

The eagles are both fledglings. The young eagle found near Lake Allatoona, not far from Cartersville by fishermen in June, suffered from a leg fracture.

The bird discovered in Irwin County, also in June, was described by the Georgia Department of Natural Resources as “malnourished and near death.”

The Irwin County eagle was released just over a week ago at Paradise Public Fishing Area in Tift County, a few miles away from where it was found. It was released in a spot officials believe has more abundant food and water and a better habitat for a young bird getting ready to stake out its territory.

“This is one of the most amazing rescues that we’ve done, not just because it’s a bald eagle, but because it was as close to death as it could have been when it was found,” the Georgia Wildlife Association said on Facebook. “To be able to release it in two months time is truly remarkable and is a testament to the collaborative effort to save it.”

The eagle found near Lake Allatoona was released back into the wild on July 29 at the Girl Scouts’ Camp Pine Acres on the lake where it was found.