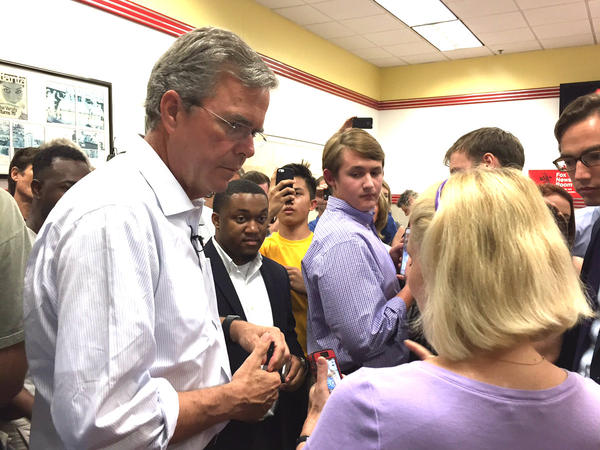 At the local fast food landmark, he fielded questions about his Republican rivals, immigration and education. But first, he ordered “the yellow dog,” a plain hot dog with mustard.

Bush spoke with supporters, saying he’ll visit the state often because of Georgia’s early primary, which is set for March 1.

The former Florida governor said he opposes Donald’s Trumps plans to deport millions of immigrants who are in the country illegally and to end birthright citizenship.

“We need to create a path to earned legal status ─ that’s the thoughtful way of dealing with this,” Bush told reporters. “What Mr. Trump has proposed will cost hundreds of billions of dollars, will disrupt communities, isn’t feasible, isn’t practical.”

When asked about whether he supports Common Core educational standards, he said he supported “high standards” that are driven by states.

“The federal government should have no say in the creation of the standards or content or curriculum. They should be completely out of that business,” Bush said.

He said he also supported Gov. Nathan Deal’s plans to take over the state’s failing schools.

“I respect Gov. Deal’s position on this, I think it’s the right thing. We should have very little tolerance for failure,” he said.

This is Bush’s second visit to Atlanta this month. The Florida Republican also attended the Red State Gathering, which draws conservative grassroots activists.