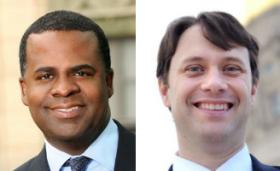 State Democrats are certainly excited about Jason Carter’s run for governor. The state senator and grandson of former President Jimmy Carter raised $1.3 million in his first quarter of fundraising.

But as it stands now, Atlanta Mayor Kasim Reed says Carter still has work to do to gain support from him and others.

After Monday’s inaugural speech at the Atlanta Civic Center, the newly re-elected Democratic mayor said this about Carter:

“I definitely have said that I think he’s special and he definitely has an opportunity to win. But I’m not a bandwagon jumper. When you offer yourself for office, you’ve got to get out here. You’ve got to go through it. That’s what I did.”

Reed pointed out Carter didn’t support him during his initial run for mayor. Reed said no one really did.

“Nobody jumped on my bandwagon when I ran for mayor. I ran for mayor almost alone for two years…20 months. The only person who stood with me was Ambassador Andrew Young.”

Reed, who has forged a friendly relationship with Republican Gov. Nathan Deal, said Carter will have to earn support from him and others.

“I’m a little taken aback by the notion that somebody just offers themselves for office and you line up. I think you get out there, you earn it, you fight for it and then you come and line up behind the nominee,” said Reed.

In an emailed statement, Carter congratulated Reed on his re-election and said, “I look forward to having his support as the Democratic Nominee for Governor of Georgia, and to continuing to work with him to move our state forward.”