Monday night the Kennesaw City Council rejected a plan to house an Islamic center in an empty retail space in a strip mall.Broadcast version. 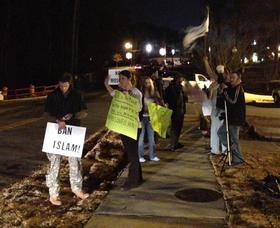 The vote came a month after a heated debate at the last city council meeting. Doug Dillard, the attorney for the Suffah Dawaad congregation, says they took painstaking efforts to comply with the community’s demands.

“We would agree to limit capacity for each service to no more than 80 persons,” Dillard said. “We would also agree to limit parking to 40 parking spaces within the center. Noise has been an issue. All services will take place inside the facility.”

But when the time came, Kennesaw Mayor Mark Matthews had trouble getting the council to take a vote at all. No member would second the motion to proceed.

After several very awkward pauses, the council finally voted. Four of the five members voted “no”. Outside the chambers a handful of residents were protesting. Tammy Pacheco admitted she’s not concerned about noise or traffic.

“I think that the terrorist organizations fund Islam and that they’re not peaceful and even the moderates eventually become violent,” she said. 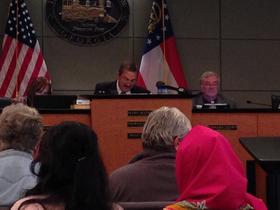 Congregant Nayyer Islam is frustrated by those stereotypes and the vote itself.

“This whole thing is what media has projected the image of Muslims and Islam as a whole,” he said. “We have been worshiping elsewhere and we will continue to do that, but it does not change anything.”

Some Kennesaw residents, like Arden Stone, disagreed with the council. Stone, herself a Christian, said the vote doesn’t make sense in a place that was founded on religious freedom.

“Wherever you live, you want it to reflect the what the ideals of what our country are all about and [that] didn’t happen tonight,” she said. “Sorry about that.”

That’s why attorney Doug Dillard says he’ll advise the group to file a lawsuit – which is how Muslim congregations in Lilburn and Alpharetta resolved similar disputes. But this mosque hasn’t decided yet whether to go that route.