During this Fall Fund Drive, we’re looking back at some of our favorite work we’ve brought you on City Café in recent months. 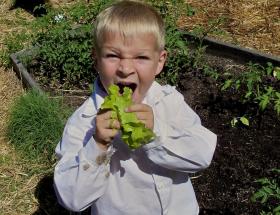 Atlanta Public Schools gets most of its cafeteria food from the Southeast. It’s all part of a larger plan to get kids eating fresher food—which sounds great.

But let’s be honest. We’re talking kids and vegetables.

As Garden Hills kindergartner Jack Funderburk puts it one day during lunch, the hands-down best thing on his cafeteria tray is the chicken. His least-favorite thing?

He points to the untouched pile of steamed kale. “That. Greens. I do not like too much greens.”

It’s not exactly news: Even if it is locally sourced, a lot of kids are just not into vegetables. Trays across this cafeteria are dotted with untouched greens. And here, we hit a challenge in bringing in local veggies: Getting kids to eat them.

To that end, another school is trying something different .

Twelve APS Schools have classes that somehow incorporate gardens, but this one is the most extensive. Mobley brings the kids’ math, social studies, and even Language Arts lessons into the outdoors—but she says it’s really about the basics.

“Something I noticed when I started teaching these lessons, is a lot of kids don’t know what a carrot looks like coming out of the ground, or how those things are grown, or what they look like in nature. They’re so used to just finding food in a grocery store.”

Mobley says her class helps kids to be successful adults by bringing real-life experience into the school-day. The students learn about nutrition. On the day they pick the kale and make the soup, there’s a review Q&A about which vitamins kale is strongest in. (A: Vitamin A, that vision-promoter, is the big champ.)

But they also learn to care for plants and cook food. They learn all about different kinds of broth, and how to use a can opener. In this classroom, home-ec meets science class.

All this aside, the moment of truth comes when the kids return to try the soup they made from the kale they grew. Choruses of “It’s good”s and requests for seconds signal a successful inroad against picky eating.

It could be that nothing builds appetite quite like a sense of ownership from the ground up.