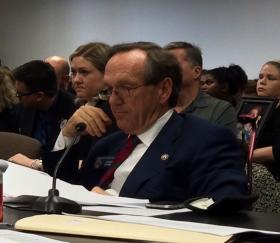 A House committee has tabled a bill that would create a city of Lakeside in central DeKalb County.

With only three days left in this year’s legislative session, it’s now an uphill battle for Lakeside, but advocates say it’s not over yet.

In a packed committee room, Sen. Fran Millar, R-Dunwoody, made his final case for Lakeside.

“What I’m telling you is the reason people are doing these cities – its very simple. We want our roads paved. We want code enforcement. And, by god, we want police protection,” said Millar.

The communities of Lakeside, Briarcliff, and Tucker all want to be cities to gain greater local control. Only Lakeside has legislation – Senate Bill 270 – that has been approved by a chamber of the General Assembly by the March 3rd Crossover Day deadline.

At the committee meeting, Millar said he and other Lakeside advocates had recently reached a deal with advocates of Tucker over their conflicting boundaries. Miller said the agreement included allowing the Lakeside bill to move forward if he supported a Tucker bill next year.

But John Meadows, a committee member and chair of the powerful House Rules committee, motioned for the Lakeside bill to be tabled.

“I don’t think there’s another person in this building down there that’s more pro-city than I am,” said Meadows. “I don’t like the idea that I’ve got three different set of folks who want to be a city and if I pick one right now I don’t think the other two have a chance.”

County officials and many advocates of the other cityhood efforts praised the move, saying more time was needed to work out differences.

DeKalb County Interim CEO Lee May hopes no action is taken this year.

“If this holds, then we’ll have an opportunity in DeKalb County to work through our issues internally,” said May. “Over the next 9 months We’ll bring back recommendations so that this body can really be more deliberative in making the decisions.”

Millar, however, said don’t count out his Lakeside bill yet. He said Lakeside and Tucker advocates will talk with Chairman Meadows.

“Oh yes, I think it’s very viable still. They alleviate the chairman’s concerns. The Tucker people are probably going to meet with him probably today. They call another meeting. We vote. It goes to the Rules calendar. If it makes it to the floor, it passes,” said Millar. “I mean, it’s hard for me to believe at the end of the day we don’t want people to have self-determination as Republicans. I think the chairman has just got some concerns he wants to make sure they’re answered and obviously I didn’t do a very good job doing that.”