Earlier this month, Georgia licensed Daniel Tzros as the state’s first healthcare navigator, so no doubt the big launch of the insurance exchange was a big deal to him.An audio version of this story

At his Peachtree Street office, he’s explaining how easy it is to navigate the new site. 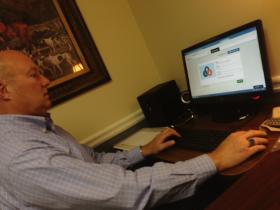 And there’s a hiccup.

The site indicates there are too many visitors, and it can’t handle the traffic, and instead prompts consumers to call a customer service number,

It doesn't work either — too overwhelmed.

But Trzos doesn’t see the hiccup as a problem.

“This is a good thing. [Consumers] are are shopping; they’re looking.”

DeKalb resident Keith Miller also got the error messages, which to him, were just the latest in a long line of frustrations.

“Eighteen months with the Affordable Care Act have not been very good,” says Miller, who has a pre-existing condition and has been insured under a federal pool that covered those costs.

Miller partially blames state leaders for giving the exchange duties back to Washington.

“Had the state of Georgia had set up a state program, instead of turning it over to the federal government or really washing their hands of it , I think it would have been a lot better.”

Georgia was one of 36 states electing to let the feds run the state’s exchange.  Twenty-four of those states experienced similar problems on launch day. 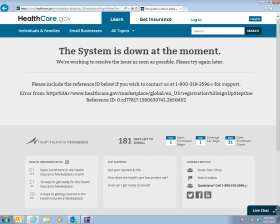 And while the day-one technology issues were front-and-center, they're just one issue in Georgia.