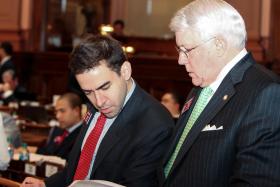 On the 40th and final day of legislative session, state lawmakers signed off on a pair of bills related to MARTA.

Currently, the Fulton and DeKalb County Commissions appoint seven of the 11 voting members to MARTA’s board. Under HB 264, some of that appointment power beginning in 2017 would be shifted to a group of mayors in DeKalb and north Fulton.

“Where citizens have chosen to be incorporated into a city, they have selected that city to speak for them on transportation policy and that is what these shifts on the MARTA board are all about,” said bill sponsor Mike Jacobs, R-Brookhaven

Under HB 264, the Fulton County Commission would go from appointing three members to one. The DeKalb County Commission would go from four to three. A group of north Fulton mayors would select two members and mayors from across DeKalb would select another. For the first time, the governor would have a direct appointment, while the Georgia Regional Transportation Authority would lose a seat. The City of Atlanta’s three appointments would stay the same.

Another provision in the bill lifts a spending restriction commonly referred to as the 50/50 split, which says half of MARTA funds must be used for daily operational expenses, the other half on capital improvements. The suspension of the 50/50 split would be in effect for three years.

In addition, the bill changes an aspect of MARTA’s collective bargaining process. Rather than an arbitrator appointed by the governor,  labor disputes would be settled by a judge statutorily required to consider MARTA’s long-term budget plan.

MARTA union chief Curtis Howard fought against the change and said it would hurt workers in ongoing and future contract negotiations.

“It makes it not a fair playing field. It’s stacking the deck,” said Howard.

Meanwhile, a separate set of bills – HB 265 and HB 1009- would allow Clayton County to hold a referendum on adding a one percent sales tax to officially join MARTA. To hold the referendum, the Clayton County Commission would have to sign off first.

Both bills still need approval from the governor.