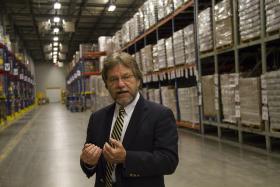 The association said the money and food donations equate to 1.14 million pounds of food, which will serve about 2 million meals.

Atlanta Community Food Bank head Bill Bolling says the drive comes as children who qualify for free and reduced-price meals are out of school and donations to the food banks are typically low.

“Only a small percentage of kids that are out of school access summer meals – only about 15 or 16 percent,” Bolling said. “That means 85 percent of the kids who might rely on school breakfast or school lunch don’t have access to those meals.”

The two-week annual challenge is run jointly by the attorney general’s office, the Young Lawyers Division of the State Bar of Georgia and the Georgia Food Bank Association.

The money and food will be distributed to the state’s seven regional food banks, which serve more than 600 charity organizations.