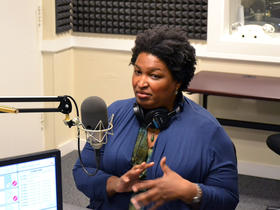 In this two part interview, the conversation begins with Abrams talking about education.

In part two of the interview, the conversation begins with Abrams talking about Republican Representative Sam Teasley’s religious freedom bill.

She said that whether one serves in the minority or the majority in the Assembly, elected officials’ success should be measured by the effectiveness of Georgia’s government in meeting its citizens’ needs.