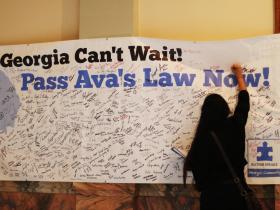 Private health insurers would be required for the first time to cover autism treatment under legislation being considered at the Georgia General Assembly.

The two proposed bills – House Bill 309 and Senate Bill 191 – are named after Ava Bullard, a nine-year-old from Lyons, Georgia who was diagnosed with autism at the age of two and after treatment is now thriving at home and in school.

She spoke on the Senate floor Tuesday.

“I’m nine years old. I like to sew and I’m glad for my treatment and please pass this bill.”

Georgia is one of 16 states that don’t require insurers cover autism treatment.

A version of Ava’s Law was proposed last year, but it failed to pass due to concerns about cost and efficacy of the treatment.

Sen. Tommie Williams, R-Lyons, is a co-sponsor of SB 191 and Ava’s great uncle.

“We’ve studied it for four or five years now. It’s time for us to move forward,” said Williams.

Melissa Solaris says there’s overwhelming evidence that treating autistic children at an early age has a high success rate in terms of behavior and speech function.

According to her advocacy group Autism Speaks, Ava’s Law would add 32 cents per month to private insurance policies – a small cost, Solaris says, for helping an estimated 30,000 children.

“People go, well, why should I pay for autism when I don’t have anybody affected by autism? Well, I pay for prostate checks. I pay for cancer. I’ve never been affected by cancer. That’s the whole point of insurance is that we group together and share that risk,” said Solaris.

In his proposed 2015 budget, Gov. Nathan Deal included autism treatment as part of the state health benefit plan, which covers all state employees, including teachers.