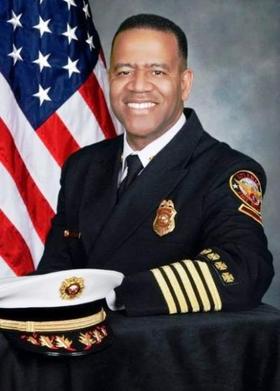 Reed on Monday suspended Cochran for a month without pay after a self-published book surfaced in which Cochran writes homosexuality is a “perversion.”

In a emailed statement, Mayor Reed said he was “deeply disturbed” by the writings, adding he “will not tolerate discrimination of any kind” within in his administration. Reed has ordered an investigation into whether Cochran discriminated against anyone in the fire department. He is also requiring Cochran undergo sensitivity training.

“It appears that his language is so extreme, so belittling of gay and transgender people that I don’t see how he could possible lead a diverse workforce,” said Graham.

Cochran’s book, titled “Who Told You That You Are Naked?”,  includes a passage that compares compares homosexuality to pedophilia and bestiality. The book has been available publicly at least since November 2013, according to Amazon.com.

Graham says Cochran’s beliefs create a “chilling effect” for anyone that has to work with him.

“I think he needs to be held accountable for his words and that frankly the only course of action at this point and time is his immediate and permanent dismissal,” said Graham.

In response, Reed spokeswoman Anne Torres said, “it is too soon to say whether or not additional action will be taken. That will depend on the outcome of the investigation.”

City Councilman Alex Wan, who is gay, called Cochrans’ words “hurtful” and “very offensive.” Wan is also waiting for the city’s review to be completed before he says whether Cochran should be permanently removed.

“Until we have those specific instances, it’s hard to try and take disciplinary action based on the city’s policies,” said Wan. “That said, I mean I know what decision I would make personally on this but I’m not the mayor.”

Wan did say it’s tough to ignore what Cochran wrote.

“Personally for me knowing now what Chief Cochran believes himself changes our relationship and can’t not change the dynamic between him and me, but I’m a councilmember and I’m not his boss technically so that is kind of the reality of the situation,” said Wan.

Mayor Reed’s office says at this point it doesn’t know when the investigation will wrap up.