Several U.S. colleges have seen declining enrollment since the recession began. But changes to a federal loan program in 2011 have hit some historically black colleges and universities, or HBCUs, especially hard.

Clark Atlanta sophomore Jasmine Johnson says waiting for a loan to be approved can be stressful.

“My freshman year when I got here, I didn’t have enough money because my Parent PLUS hadn’t been approved yet,” she says.

The Parent PLUS is a federal student loan. 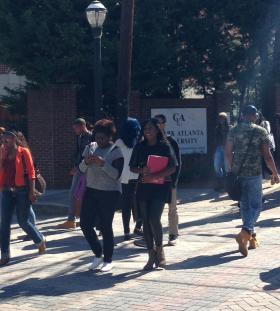 “They didn’t let me move in my dorm. And I was like, ‘Where am I supposed to go? I have no family in Atlanta,’ and they just was like, ‘Well, you can’t move in,’” she says.

“If it happened at a place like Ohio State, which has huge numbers, it doesn’t end up being as big of a deal,” says HBCU expert and University of Pennsylvania professor Mary Beth Gasman. “But if it happens at an institution that has 1,000 students and you’re tuition-driven, it does end up being a big deal.”

Plus, Gasman says, federal officials didn’t warn schools about the changes. She says HBCUs really felt the squeeze because they serve a higher number of low-income students who need to apply for loans.

At Spelman College, the changes initially affected about 200 of the school’s 2000 students.

“Two hundred students not coming back does affect the bottom line of our budget,” says Lenora Jackson, Spelman’s director of financial aid. “So, we had to come up with some very strategic ways of getting those students back in school.”

Jackson says Spelman was proactive. The school offered students scholarships to make up the gap and coached parents on how to seek an appeal.

Morehouse, on the other hand, had to cut $2.5 million from its budget. That meant laying off 50 employees. 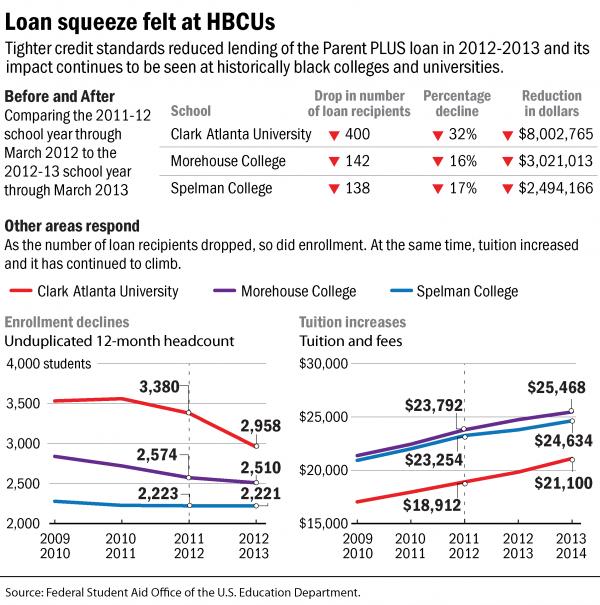 Gasman says it’s not a crisis. Enrollment is up at some HBCUs. But, she says, if schools, like Morehouse and Spelman cant recover, the effects could be widespread.

“Spelman has a great track record just in general for producing leaders across the globe,” Gasman says. “If you look at their alumni, it’s profound. Morehouse is exactly the same way.”

Federal officials have proposed changes to the PLUS loan. The new standards would relax some of the loan’s credit requirements starting in the fall of 2015.