During his speech, President Obama said recovery is possible and help is available. Yet he says as a society we often think of mental health differently than other forms of health. The President says that has to stop. 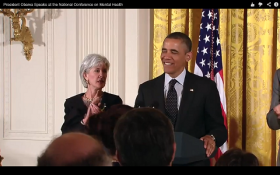 Those words pleased Dr. Ray Kotwicki. He’s the Chief Medical Officer at Skyland Trail, which focuses on adult mental health treatment and recovery and an associate professor of psychiatry and behavioral sciences at Emory University.

“Despite the fact that research data are quite clear that mental health problems are biologic health problems, just like if you had diabetes or cancer, there still seems to be a stigma from seeking help when they need it, and the President sounds like he’s committed to changing that.”

The President also says a better job of recognizing mental illness in children is needed.  And to make early diagnosis and treatment a reality, he says investments are being made in science and basic research. Thom Bornemann is mental health director of The Carter Center. He says the Center supports the efforts and agrees that early recognition is key.

“That’s a huge area that needs more attention. We need to do a better job on childhood screening and prevention and early intervention where a condition is starting to show itself. So often, children do not get into care until they are far along into the process of developing a condition and then it’s always harder to get better.”

The president also spoke about the doing more to support troops and veterans. As part of the effort, he says the Veterans Administration plans to hold more than 150 summits on mental health throughout the country this summer. A spokesperson for the Atlanta VA confirmed one of those summits will be held in Atlanta. But she says a date for the summit has yet to be determined.