As part of Minority Donor Awareness Week, Piedmont Atlanta Hospital says there is a greater need for organ donation among minorities. But the hospital says it’s especially needed for African-Americans. That’s why a local teacher who recently received a kidney from her brother is sharing her story. 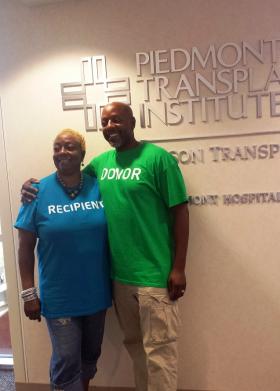 “I went to work everyday and there were times that you know I did not feel well. It’s a grueling process.”

During the following year, Christopher began waiting for a kidney transplant. Doctors said it could take three to five years or longer. In the meantime, her younger brother , Andrew Smith, told Christopher he was interested in donating his kidney.

“I really wanted her to have a longer life and a better quality of life.”

Earlier this year, they learned they were a match.

“Excitement, Exuberance. Everything was just amazing. You would have thought we won the lottery. We did win lottery.”

Then on July 19, Smith donated his kidney to Christopher at Piedmont Atlanta Hospital.  Christopher is recovering but says her life is already improving.

“It’s wonderful not to have to go to dialysis. I’m getting better each day.”

Because of her experience she’s hopeful more will consider organ donation.

“The reality of it is that it is a major surgery, but I’m recovering very well. I think the outcome of the surgery far outweighs the fear and the risk. She has a portion of her life back and that made it all worth it.”

Nationwide, African Americans make up more than a third of the 97,000 people on the kidney transplant waiting list.