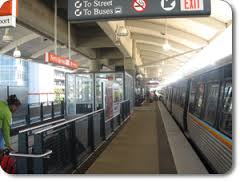 When MARTA was established, more than 40 years ago, it was a political battle. Many – including historians – would argue the battle was all about race: that there were suburban residents who did not want the transit system bringing people from the city to their communities. Now, as MARTA is three years into a study of whether to extend its service as far as Alpharetta, the issue isn’t race — but age.

State Senator Brandon Beach leads the North Fulton Community Improvement District. “When you look at the 400 corridor, there are 900 technology companies, and that attracts a young, smart employee,” said Beach. “They want to ride their bikes; they want to take a train; they want to take transit; they want alternatives.”

Beach is a big proponent of extending service, but at a public comment session last week, with approximately 100 people in attendance, MARTA project manager Janide Sidifall admits reaction to early plans was decidedly mixed. “If, overwhelmingly, the public does not want it, then there’s no point in implementing it,” said Sidifall.

MARTA has extended the public comment period on the project, which it calls, “Connect 400,” through July. After starting with some 20 possibilities of routes and transit methods, Sidifall says the working model extends the current rail line for six more stations, saying “If you implement heavy rail from North Springs to Windward Parkway, you can stay on the same train and get to where you’re going.”

Beach thinks it is an idea whose time might just be now. “In 1999, when I was first elected to Alpharetta City Council, if I would have mentioned that I was supportive of transit, I would have probably been run out of office,” said Beach. “Today the attitude has completely changed.”

But it won’t happen overnight. This planning and public comment process is just part of the effort to get federal funding. Sidifall estimates riding the rails from downtown Atlanta all the way to Alpharetta could be a decade away.