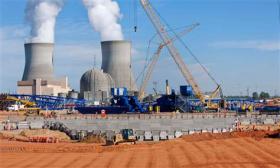 The incident happened December 15th, when a 300-ton steel reactor vessel began to rock as it was being transported by railcar from the Port of Savannah.

“The reactor vessel became misaligned with a special railroad car. The train stopped,” said Vaughn Gilbert, a spokesman for Westinghouse, the company in charge of manufacturing the new reactors.

Gilbert said Westinghouse is still trying to figure out what happened. He did say the misalignment wasn’t the result of the reactor vessel being too heavy for the railcar.

“In this case, obviously something went wrong and we’re trying to find out what happened so it doesn’t happen again.”

In the meantime, the part, which Gilbert says wasn’t damaged, was returned to the Savannah port.

Officials with Georgia Power, which manages the construction site, said the incident won’t affect the project’s schedule or cost because the part wasn’t slated for use until later this year.

Some observers, however, say the incident is yet another example of project mismanagement.

“All this makes me very anxious, but I’m not surprised,” said Bobbie Paul, executive director of the Georgia Women’s Action for New Directions.

Paul says the misaligned reactor vessel is another troubling sign.

“Right now, we’re just dealing with the construction of something that’s going to be dealing with dangerous materials and if we can’t get that right, what does this say when those switches are eventually going to get turned on for those reactors?”

She pointed  to testimony of the state’s main project inspector who has repeatedly cited poor performance by the site contractors as the reason for delays and escalating costs.

But Joey Ledford of the Nuclear Regulatory Commission, which is overseeing the project, says Westinghouse catching it when they did is actually a good sign.

“The fact that the problem was identified promptly and returned to the port and the problem is being corrected, I think is a good example that in this case there was attention to detail.”

The two proposed nuclear reactors are currently set to go online some time in 2016 and 2017.

Meanwhile, Georgia Power ratepayers are paying the project’s financing costs upfront and could be asked to pay costs associated with delays in the future.

*The Augusta Chronicle has a photo of the incident posted here.