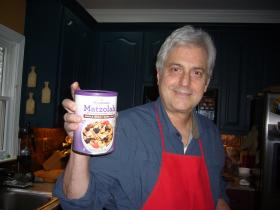 Passover begins next week. The Jewish holiday commemorates the mass exodus of Jews from Egypt. For eight days, observant Jews will eat Matzo, a symbolic dry, flat cracker,  also known for its cardboard taste. And that is what fueled the entrepreneurial spirit of an Atlanta couple. 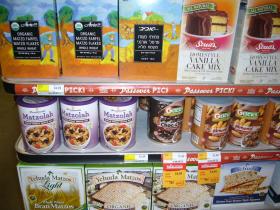 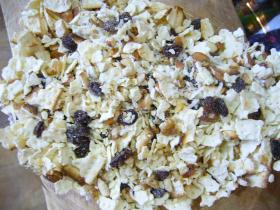 Wayne Silverman has been making maple-nut matzo granola in his kitchen for more than 40 years…as a way to actually eat something tasty during Passover.  He calls it Matzolah.

“I eat my Matzolah in every way possible; just snack on it, pop it in my mouth. I love to put it into yogurt.”

He invited me to try his latest, gluten-free version, he’s been tweaking it for the past few months. It was very tasty and crunchy.

Because the Jews were slaves in Egypt and left in haste, they didn’t have time for their bread to rise. Which is why during Passover, they eat matzo, unleavened bread, and abstain from other grains.

So breakfast, says Silverman, can be challenging. “A lot of people have said breakfast foods at Passover tastes like the box. This doesn’t taste like the box.”

Silverman thought his crunchy mixture of broken matzo, nuts, and raisins was so good he started sending it to friends around the country. They loved it and kept telling him to sell it commercially. About ten years go, his wife and daughter took it around to some supermarkets , and some he said, actually wanted to sell it.

“They got sold at H.E.B.’s, Albertsons, and everyone loved it, it all sold out.” And then Safeway said they wanted 10,000 cases. But he says they got scared. “We went back to our day jobs. And it went into hibernation.”

Silverman continued his career in non-profit administration but continued making his Matzolah.

“We’d been talking all along, and Laura, my wife said, we have to do this. We can’t end our lives and not know how this was going to turn out.”

So last May, at age 60, he left his job, joined forces with a couple college friends, invested his savings, and went to New York to find a company to back him.

Kosher Passover foods are a small but mighty niche market.

“There’s a set of dietary requirements during Passover and it makes formulating new products a little bit of a challenge,” Says Mike Schall.

Schall has worked in food product development for more than 30 years, and served as President and CEO of Manischewitz, a major kosher food company.  He says Matzolah is something he’d never seen before in the Kosher food segment.

Striets not only bought the innovative idea, they decided to make and distribute the product and be a partner in the company.

Matzolah made its industry debut in November at the 20th annual Kosherfest in New Jersey. It won “Best New Passover Product”

Consumers got their first taste of the commercial product last month when Laura Silverman brought samples to a Jewish Holiday Festival in Atlanta.

Mother of 3, Chavi Lewis bought a can on the spot. “It’s delicious. Tastes like a granola bar. Really good.”

In less than a year, Matzolah went from Wayne Silverman’s kitchen shelf to shelves across the country at Kroger, Albertsons, Stop and Shop, and Whole Foods, who’s selling an exclusive, whole wheat version.

But you’ll have to wait until next summer to try the gluten free version.