In the letter, Deal told the president the state wasn’t prepared to accommodate the children. He said many mayors and lawmakers agree that it’s time to “reign in the influx of refugees” to Georgia. Reed said he’s not one of those mayors. 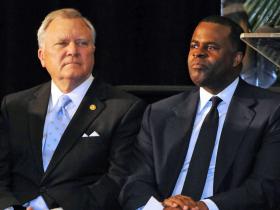 “I haven’t read the governor’s letter, but I’m not surprised,” Reed said. “We’re just in a different place on this. I think that our city should be welcoming to these young people. I established a Welcoming Cities initiative months ago. This isn’t a new position for me.”

The children, who come from Guatemala, Honduras, and El Salvador, are apprehended at the U.S./Mexico border. They’re placed with sponsors, usually family members, while they await a court date. Those who qualify for special juvenile status can stay, but all aren’t eligible. Reed said they should all be welcomed.

A spokesperson for Gov. Deal says there’s been no word from the Obama administration.