The trial started Tuesday at the Children’s Hospital of Georgia in Augusta. The subjects are two children who have type of epilepsy that doesn’t respond to conventional medication. The trial has the okay of the U.S. Drug Enforcement Administration and the Food and Drug Administration. 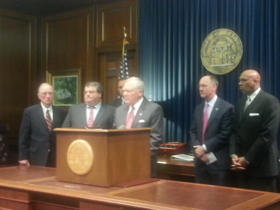 The children will get a kind of cannabis oil that’s manufactured by GW Pharmaceuticals. Another clinical trial will allow 50 more children with epilepsy to get the same oil. That work will start at Georgia Regents University in Augusta and eventually expand to some unnamed sites in Savannah and Atlanta.

Governor Nathan Deal announced his support in April. The effort comes after a bill to legalize the use of cannabis oil, for those with seizure disorders, failed to win final passage. But another bill to make cannabis oil legal for some residents and to allow for its production here in Georgia has already been pre-filed for the upcoming legislative session.