250,000 people were in Atlanta this weekend for the lesbian gay bisexual transgender event know as pride. And as Aleck Ragsdale reports, one group of people showed their pride through music.Click play to hear the radio story 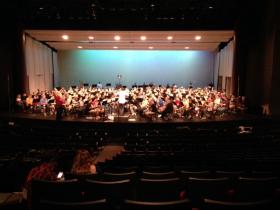 200 members of the lesbian and gay band association are all seated on stage at Georgia Tech’s Ferst Center for the arts warming up for rehearsal.

They’re here representing 32 different symphonic bands from across the US. They’ve only had two days to rehearse together before the big concert. Cliff Norris, president of the association’s local chapter, Atlanta Freedom Bands, says everyone’s here because they enjoy all the long hours that go into rehearsing.

“I guess you could call them band geek vacations. We don’t go sit on a beach. We sit in a hotel ballroom for 5 to 6 hours a day playing music”.

Brian Worsedale traveled here from New York to be a guest conductor in the concert. He says the music they play together is a way to show their pride and fellowship.

“For a lot of us it’s like a family reunion. We only get to see each other once a year and then we also meet new friends, and make new experiences through music, workshops, and discussions. Music is a very powerful thing; more than words can ever speak. Music speaks so much more and can basically knock down walls”.

The entire theme of the concert revolved around the colors of the rainbow  flag. The Lesbian Gay Band Association even commissioned this piece of music. Tim Jansa is the composer.

“It was a daunting assignment if I must be completely frank. My hope is that it has an appeal not just to members of the LGBT community but also to anybody, especially young people who try to make a mark in this world, who are trying to find who they are, who are trying to establish who they are in this society. And that’s really what the piece speaks to”.

About 250 people attended the concert.