In many Georgia counties, the drought is clearing up. The state recently relaxed water use restrictions in dozens of counties. But not in metro Atlanta, most of which remains in a “Level 2” drought response. In places that rely on Lake Lanier for water – that includes most of the metro area – the drought drags on.

It’s a little cognitively dissonant. It’s been rainy in Atlanta, so how could we still be short on water?

The problem is that the water flowing through Atlanta’s pipes is from north of the city, and it’s still dry up there.

At a park on the banks of the lake in Gainesville, the view includes exposed red clay banks, and docks sitting on the ground. Gainesville has gotten more than 20 inches less rain in the past year than a normal year.

The warm winter means more water has evaporated from the lake and from the soil and plants, said Bill Murphey, state climatologist and head meteorologist for Georgia’s Environmental Protection Division.

“The recharge that we still need just hasn’t happened this winter,” Murphey said. “The storm track has just been riding a good bit too far to the south.”

Lake Lanier has been about 10 feet below full pool all winter.

“It’s been almost a flatline, which is very unusual for this time of year,” said Randall Harvey, chief of the Water Resources branch at the U.S. Army Corps of Engineers’ Mobile District, which manages Lake Lanier.

It’s not unusual to see lake levels get drawn down during the year, Harvey said, but around this time of year should be a wet season, when the lake refills.

“This year we haven’t seen that,” he said. 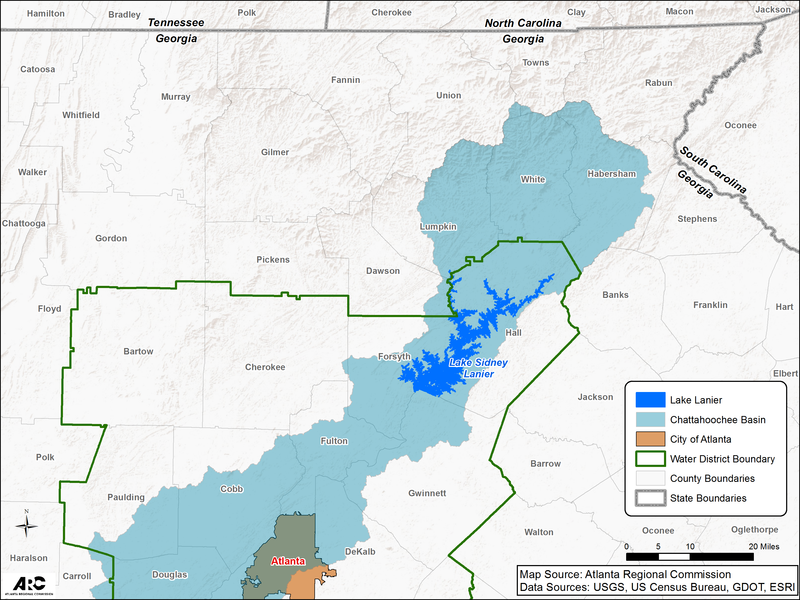 That’s troubling, said Katherine Zitsch, natural resources manager at the Atlanta Regional Commission, because even during droughts the lake usually refills at least a bit.

Zitsch said this drought has taken the worst aspects of two previous droughts and combined them.

Even once the rain does come, the lake level could take months to come back up.

So Lake Lanier is like a huge tub that’s filled by a relatively small faucet, which, over the past year, has been turned down to just a trickle. That means water levels could stay low through the spring and summer.