Tens of millions of dollars collected by the state through small fees on things like new tires, prepaid cell phones and police fines aren’t spent how Georgia lawmakers intended, creating a system critics call a scam on taxpayers.

The piles of dumped tires along roadsides and behind abandoned lots throughout Georgia may be the most visible symbol of how environmentalists, county officials and conservatives say the state’s accounting process deceives taxpayers.

Lawmakers should be more transparent about how they spend money collected through the fees, says Mike Bland, the owner of Motor City South, a garage in East Atlanta.

“I do run a small business, and if I misappropriate funds here, I’m in trouble,” Bland says.

If Bland charges a customer $100 for a new car battery, he can’t install $10 windshield wipers instead and spend the difference on other repairs he deems more necessary. But the state of Georgia has the freedom to do something similar with money collected through fees.

For every new tire bought in Georgia, the state charges $1. That money is supposed to go towards environmental programs – like cleaning up illegally dumped tires – but instead it ends up in the state’s general fund.

In the past decade, Georgia raised nearly $70 million from new tire fees, but only one-third actually went to tire clean-up and environmental protection, according to analysis by the Coosa River Basin Initiative.

If the new tire fee went away, Bland says he could pass the savings to customers, or even pay his employees more.

Bland says he pays from his own pocket to fight illegal tire dumping, the same problem the fee was intended to fix. There are fewer dumped tires in the neighborhood than there used to be, he says.

“But you need only go a couple miles down the road to see the proliferation of tires laying around,” Bland says.

Driving around west Atlanta, it only takes Jason Ulseth, the Chattahoochee Riverkeeper, about 15 minutes to spot a pile of 80 tires covered by brush in the back of an empty lot near Proctor Creek. One tire was dumped so long ago there’s a 30-foot tree growing through it. 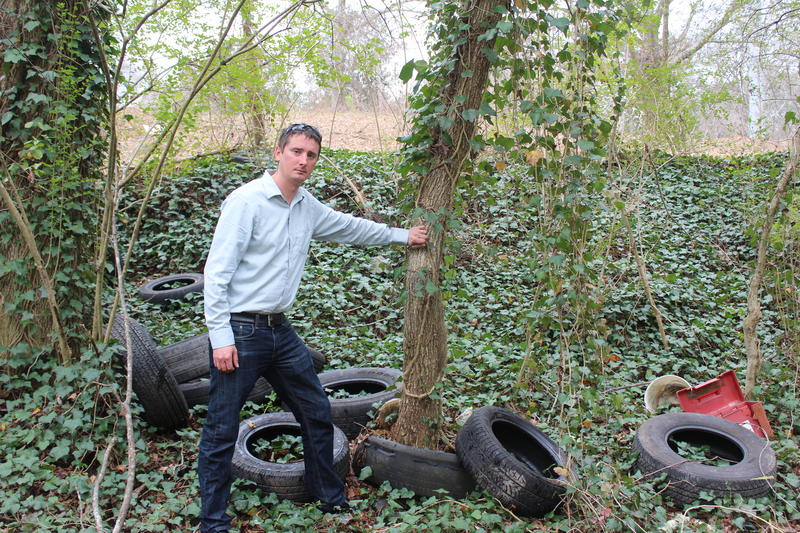 Just around the corner is an even larger pile of at least 200 tires.

“They’ve been dumping here for a while,” Ulseth says. “It infuriates me.”

He turns over a tire and water splashes out.

“Every one of these things is full of water, because when they land on the side you don’t get a lot of evaporation coming out of them,” Ulseth says.

The tire dumps can be a breeding ground for disease-carrying mosquitoes, can pollute streams, and can bring down property values nearby, he says. In neglected neighborhoods, tire dumping can make health and financial problems even worse for residents.

Recycling old tires is costly for garages and disposal companies. Dumping the tires is a quick, easy and illegal way to increase profits.

Ulseth says if more of the tire fee money went to clean up and dumping prevention, there would be fewer illegal tire piles.

“The money was created by tires. So then that money should be spent on fixing the problems tires cause to our environment and our general public safety,” he says.

Ulseth and other riverkeepers are planning a protest featuring signs, speeches and a replica of the state capitol built out of old tires they call the “Scrapitol.”

At the state Capitol, Rep. Terry England and Rep. Jay Powell sit next to each other in the House chamber. England leads the state’s Appropriations Committee, while Powell oversees the Ways And Means Committee, which deals with taxes and fees.

Lawmakers need the power to move money collected through specific fees into the general fund, England says. If they couldn’t do that, during the Great Recession there would have been even bigger cuts to things like education and police.

“Are we more worried about taking care of tires dumped somewhere then we are kids having a teacher in a classroom?” England asks. “That’s kind of where the rubber meets the road. That’s where it kind of comes down to.”

Even after the recession, however, money from tire fees kept flowing into the general fund.

Representatives of local governments say they also lose out when it comes to money collected through fees. Tens of millions of dollars raised by a $1.50 per month fee on cell phones didn’t make it where originally intended: local 911 emergency response.

Powell says it’s dishonest to tell people they’re paying a fee for tire clean up and then spend the money somewhere else.

“I believe that we owe it to the public that if we say we’re going to spend the money for a particular purpose we ought to do it,” he says.

Powell is behind a constitutional amendment that would make it easier for fees to be inextricably linked to spending. It would not apply to fees already in place and would cap the total amount of dedicated fees at 1 percent of the overall state budget.

Joe Henchmen, vice president of legal and state projects with the Tax Foundation, a conservative think tank, says as soon as the fees are moved into the state’s general fund, they should no longer be considered fees. He says they should be called taxes.

If they had it their way, Henchmen says, “politicians would never call anything taxes, they’d call everything fees.”

That’s because taxes are so unpopular, he says.

“Given the American antipathy to taxes, how worried we are about new taxes, how taxes get people’s attention, to the extent possible policy makers look to fees before they look to taxes,” Henchmen says.

Currently, a constitutional amendment is the only way lawmakers can be assured 100 percent of a fee will be directed to a specific purpose. That requires a two-thirds vote in both legislative chambers, as well as the approval of a majority of Georgia voters.