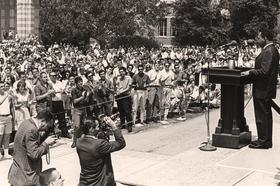 Nearly 50 years after Martin Luther King Jr. gave a speech in Los Angeles, a recording of it has surfaced.

“It was kind of a eureka moment for me,” said Derek Bolin, an archivist at the University of California, Los Angeles. He found the speech just a few weeks ago, after climbing over piles of old equipment. “We knew it existed, we just were not able to track it down. And it had been right there in the room I had been working in this whole time, just buried beneath a bunch of equipment.”

King gave the speech at UCLA in April 1965. It was the month after the march from Selma to Montgomery and four months before the Voting Rights Act was passed.

In the speech, he evaluated the progress of the civil rights movement.

King invited students to come to the South, to help register voters that summer.

“I still have faith in America. And I still believe that even though we have some more difficult days in Alabama and Mississippi and all over, that somehow this problem can and will be solved,” King said.

“If you view the passage of the Civil Rights Act as being a similar, ‘We’ve solved this problem,’ point in history, and then seeing in fact no, there’s still more to be done, then there are some eerie parallels in that sense,” said Groeling.

Groeling’s department has archived other speeches from the 1960s and posted them to YouTube, including one by Langston Hughes.