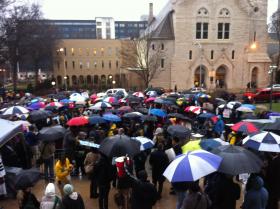 Despite pouring rain, about two hundred Moral Monday demonstrators rallied on the steps of the state Capitol, protesting the governor’s refusal to expand Medicaid under the Affordable Care Act.

“Healthcare and access to healthcare – preventative services as well as treatment – is a civil right, a human right, and a moral right,” said Otis Brawley, chief medical officer for the American Cancer Society and a physician at Grady Hospital.

Deal has argued the state can’t afford the expansion.

Protestors, however, reiterated the federal government is picking up the vast majority of expansion costs. They say Deal’s “ideological stubbornness” over the Affordable Care Act is leaving Georgia’s uninsured behind.