Five years ago, the reality of the Great Recession started to sink in.  And in the non-profit sector, a great irony emerged on both the national and local scale.

To hear the audio version of this feature, click on the 'Listen' icon above.

The economic downturn meant giving fell off sharply, leaving non-profits with fewer resources.  This, even as more people were turning to them for help.

“Our mission is to help Atlanta’s men help themselves,” says Derek Boyd, executive director of the Atlanta Recovery Center, a 165-bed shelter on Trinity Ave. 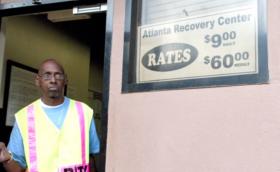 On this recent afternoon,  the Center’s foyer sees a steady stream of folks.  An industrial-sized fan attempts to counter the Atlanta heat, which still rushes in  every time the door opens.

“What I hope it looks like is a comfortable place that you can walk into, feel free to be who you are, ask questions, get some information, and hopefully get the help you need,” says Boyd.

Just off the entryway, about a half-dozen men are scattered here in a dimly-lit but well-air-conditioned room.  Sixty-year-old David Sergun sits alone in the back, half-way watching the Ben Affleck movie on the big screen in the front of room.

“Living on the street, that will change you quite a bit,” Sergun admits. 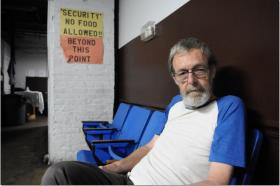 When work dried up a few years ago, he lost his duplex in Tucker and for the first time found himself among Atlanta’s homeless.

“It makes you a little harder, a little more suspicious,” he says about living on the streets.  ”It’s not a good change, a change for the good.”

For what he pays to live here, Sergun doesn’t expect a lot.  The shelter charges $9 a night, which keeps it open and running.  Still, he’s glad to have a roof over his head, even if it means he sometimes struggles.

Sergun relies on disability and Social Security to get by, but many men here depend on day labor jobs.

“When the economy falls, it trickles down eventually,” he says.  ”It affected everybody.”

It had to cut staff and rely on churches to provide many of its meals.

“Somewhere between seven and 10-percent shut down, says Karen Beavor, CEO of the Georgia Center for Nonprofits. “We had a lot, I’ve got to tell you.  We really did.”

Beavor says the real story is how many nonprofits might still shut down as their reserves dry up.

Even though the economy is improving, charitable giving is doing so at a much slower rate.

David King is President and CEO of the fundraising consulting group Alexander-Haas.   He says 2008 was the best year on record for philanthropy—nearing $350-billion.  By 2009, “we lost a decade like [snaps fingers] that, and it’s going to take us another 10-years to get back to that level.”

Non-profits that are able to stick it out will have to work both smarter and harder.

And as Derek Boyd of the Atlanta Recovery Center sees it, a little faith can’t hurt.

“I don’t think it’s any coincidence that we’re all here at the same time and same place.  Anywhere there’s God, there’s hope,” says Boyd.  ”And what better place to instill that than in a group of folks that need help the most?”

This is the first in a series of reports from WABE in partnership with Creative Loafing entitled, “The Heavy Lift.”  On newsstands this week, Creative Loafing’s Thomas Wheatley takes a look at how other area non-profits are picking up the pieces.  And for vignettes of some of the men of the  Atlanta Recovery Center, click here.

Next week, comparing and contrasting one of Atlanta’s largest non-profits with one of its smallest.