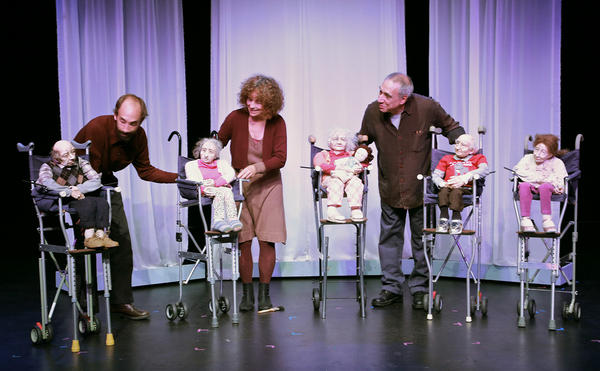 Puppetry is often associated with Muppets and Sesame Street.

But at the Center For Puppetry Arts puppetry tells more complex stories than the ABCs and 1, 2, 3s.

Founder and director Vince Anthony came to WABE to talk with Lois Reitzes about the Center’s ongoing and upcoming performances:

“Rainforest Adventure” is one of the Center’s family shows and concludes this weekend with two shows on Saturday and two shows on Sunday.

Next weekend, however, Vermont-based Sandglass Theater brings their touring show to the Center. The company was founded in 1982, has performed in 24 countries, and has won many international awards. It combines theater, music, visual imagery and puppetry.

Their new show is not animals and fun. It’s about dementia.

“D-Generation: An Exaltation of Larks” represents a collaboration between Sandglass Theater and patients with late-stage dementia at a care facility in Vermont. Over the course of 20 visits, the performers captured the patients’ experiences, their exact words and the joys and hardships for patients and their caregivers.

While non-linear and dealing with difficult themes of aging and illness, the show promises light and funny moments. It is in Atlanta one weekend only with shows on Friday, March 20, and Satuday, March 21, at 8 p.m. and Sunday, March 22, at 5 p.m.