Gwinnett County is one of only two local governments to receive a new tool to assist with mass casualty incidents like Saturday’s plane crash in San Francisco.

It’s called a Medical Ambulance Bus. The vehicle is larger than a regular ambulance but is smaller than a school bus and is stocked with medical supplies. The bus is designed to transport a dozen people who require a stretcher or 16 who are less critical. James Thaxton is the Gwinnett County Fire Department liaison to the County’s Office of Emergency Management. 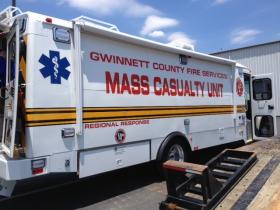 “It’s designed to kind of alleviate local resources that may be taxed in times of incidents that produce multiple patients, not tying up so many ambulances.”

The county also plans to use the bus to assist in large car accidents. Thaxton says it will also be useful during some house and business fires.

“On large scale incidents that are going to be extended, we have to rotate first responders through a rehab process in order for them to take a minute to get a breather before they get back into the operation, so this will allow a place for those responders to come and receive a drink of water, be able to cool down.”

The bus was paid for with a federal grant. The City of Atlanta also has a Medical Ambulance Bus.