Georgia has a lot of soul. From Ray Charles to Otis Redding to James Brown, this state has sprouted some of the genre’s most well-known acts.

And for local soul band Ruby Velle and the Soulphonics, Atlanta is the natural place to be.

“There is something in the water here, and in the air and the earth that gives that essence of what we do,” frontwoman and vocalist Ruby Velle says.

Velle, keyboardist Spencer Garn and guitarist Scott Clayton formed in Gainesville, Florida in 2005. They moved to Atlanta two years later, and they set up shop in the Little Five neighborhood working with other local musicians and adding new performers to the group.

Although the group formed outside the state, and Velle was born in Toronto, Canada,  the group says their music is deeply rooted in Georgia soul from the 1950s and 1960s. 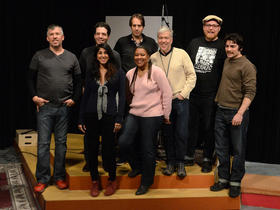 They’re not just looking to the past. though; they also consider modern and neo-soul artists like Hiatus Kaiyote and Amy Winehouse to be key influences.

“We want to be pillars of the genre, we want to be able to stand alone in the genre and not just a representation of or a throwback to anything,” Velle says. “So we’re trying to do something that’s rooted in Georgia soul, but in a new kind of modern way.”

Ruby Velle and the Soulphonics stopped by the PBA studio this week to speak with Rose Scott and Denis O’Hayer. And while they were here, they played an exclusive set from their upcoming sophomore album.

Rose Scott and Denis O'Hayer speak with Ruby Velle and the Soulphonics about the process and the inspiration behind their music.