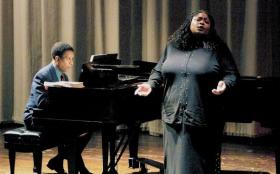 There has been a lot in the news lately about the Cyclorama — but what you might not know is that itâs also a venue, and this Sunday, they are presenting a narrated concert. The production combines the life of Frederick Douglass with the voices of New Yorkâs Opera Ebony, and itâs called No Cowards in Our Band.

The music is made up of spirituals from the 1800âs, and an Atlanta actor will portray Douglass. Playwright Anthony Knight recently stopped by to speak with host John Lemley. Knight began by telling us that he didnât just want to focus on just the music, but rather provide the audience with something that he believed could be more substantive.

Broadcast version of the story that originally aired on August 8th, 2014.

No Cowards In Our Band will be performed at the Cyclorama this Sunday at 3:00pm. More information on the event may be found here.