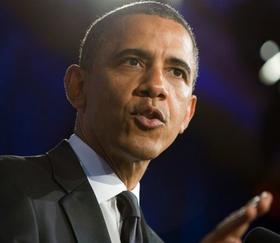 President Barack Obama is scheduled to arrive in Atlanta Tuesday afternoon, where he’ll be briefed on the Ebola outbreak in West Africa by officials from the Centers for Disease Control and Prevention.As heard on the radio

During his visit the president is expected to announce plans to increase U.S. aid to the region, where the disease has so far killed nearly 2,500 people.

“When the president travels to Atlanta tomorrow, in the context of his trip, I do anticipate that we’ll have some additional announcements to make about additional commitments that we’re making in terms of resources that can be used to address this problem,” he told reporters, though he didn’t elaborate what, exactly, the president would be announcing.

Obama reportedly is expected to pledge more medical resources and portable hospitals to the outbreak zone, as well as discuss plans to train U.S. nurses and doctors who are willing to volunteer in the region.

Earnest hinted at that possibility.

“Our doctors and scientists are some of the best in the world,” he said, “and we’re going to deploy their knowledge and resources to try to help some of the governments in Africa meet the needs of their people and confront this very difficult challenge.”

Earnest said the United States has already pledged more than $100 million dollars of aid to the outbreak.

Obama’s visit comes just days after the World Health Organization reiterated a call to health workers around the world to assist in the region.

Earlier this month CDC director Dr. Tom Frieden said the window of opportunity to contain the Ebola outbreak is closing.

The president is also expected to briefed on the enterovirus known as EV-68, which has sickened dozens of children, mostly in the Midwest.