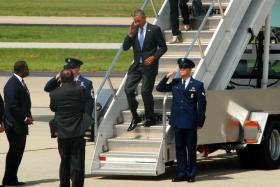 After visiting with officials from the Atlanta-based Centers for Disease Control and Prevention, President Barack Obama called the Ebola outbreak in West Africa a “global threat,” one that “demands a truly global response.”As heard on the radio

In announcing plans to ramp up U.S. aid to the region, the president painted a grim picture of the situation in Liberia, Guinea and Sierra Leon, the countries hardest hit by the disease that first popped up in April.

So far more than 2,400 people have died from the disease, according to the World Health Organization, and it’s spurred the largest international response in the history of the CDC.

Obama said if left unchecked, the outbreak threatens to kill hundreds of thousands of people.

To combat the disease, Obama announced plans through the Defense Department to establish a military command center in Liberia to support treatment efforts across West Africa. It’s been reported the department plans to send around 3,000 military personnel to the region to aid with logistics and engineering.

Obama also said the U.S. will build an “air bridge” to help get workers and supplies into the region faster, as well as a staging area in Senegal to help distribute that aid. The government will also create a facility to train up to 500 workers a week on how to treat patients with the disease and build 17 field hospitals with 100 beds each to treat patients.

The president said the outreach is “daunting,” but it’s one “we embrace.”

The president said while the threat to the U.S. is still extremely low, government officials are working with flight crews to identify sick passengers and training hospitals on how to deal with the virus.

Obama also praised Emory University Hospital doctors and nurses for their work treating three Ebola patients. Dr. Kent Brantly and aid worker Nancy Writebol were successfully treated and released from the hospital earlier this summer, and a third unnamed patient is currently under the hospital’s care.

“It’s a reminder for the American people that should any cases appear in the United States we have world class facilities and professionals ready to respond, and we have effective surveillance mechanisms in place,” he said.

Obama however warned the outbreak is likely to get worse before it gets better.