A new article raises questions about a business ranking Georgia received from a magazine it advertises with. Governor Nathan Deal has been touting the ranking in his re-election for governor.

In November, Site Selection magazine named Georgia as the nation’s number one place to do business. Since that time, Governor Deal has been using the ranking as part of his campaign, including in this commercial.http://www.youtube.com/watch?v=v9-YxeNKF0w&list=UUzZeavuyJ8RhmXE1BOux3Ng 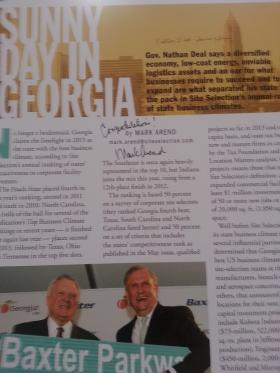 The Atlanta Journal-Constitution says Georgia’s Department of Economic Development spent more than $60,000 in the past three years for subscriptions and marketing with the magazine. It also says a nonprofit with state ties gave a $74,000 grant to a council linked to the magazine’s parent company.

Republican gubernatorial candidate David Pennington is among those who are critical.

“Now, the center piece of his whole re-election campaign is a complete hoax, us business people in Georgia knew that ranking was not worth any press to begin with. They only have a little over 200 paid subscribers.”

“You hear that type of thing all the time, where people pay to have their product featured in a favorable light, and I think there was some influence there.”

Bryan Thomas is a spokesman for Democratic state Senator Jason Carter’s gubernatorial campaign. He says, “There’s no question these rankings are suspect. It’s outrageous Governor Deal’s administration spent over a $100,000 on this magazine. But the true economic indicators in Georgia show we’re nowhere near the pinnacle.”

WABE reached out to governor Deal’s spokespeople and were told to contact Site Selection and Georgia Department of Economic Development. Mark Arend, Site Selection’s editor-in-chief, says money Georgia spent to advertise in the magazine had nothing do with the ranking.

“The rankings are objective. They are based on new project announcements that we track throughout the year. They are based also on input we get from actual corporate location decision makers.”

Arend says 31 state-level economic development agencies have advertised in Site Selection within the past year. Site Selection records show the magazine has a circulation of more than 47,000 with about 200 paid print subscribers and 200 digital subscribers.

Chris Carr is Commissioner of the Georgia Department of Economic Development.

“We’re proud that we’re the number one state to do business. Same as we were proud when CNBC named us the best workforce. Area Development also said we had the best workforce and the best rail and road network. Those are things to be proud of. The reason we advertise in that particular magazine is to bring jobs and investment to Georgia.”

Carr says Georgia does not pay for subscriptions to Site Selection but spent $42,095 on advertising with the magazine in 2013.

In November, Deal said several factors led to the positive ranking. “The general assembly has voted to roll back the sales tax on energy that is used for manufacturing, and much of the increase in manufacturing in our state is in some part attributable to that wise reform, but we also have commercial electricity rates which are on average 7 percent less than the national average.”

This week, Site Selection magazine named Georgia the most competitive state in the nation.  Georgia has ranked among the top 10 states in Site Selection’s business climate rankings for the past decade.