The holiday season can be difficult for some, especially young people aging out of foster care. Around age 18, kids who’ve grown up in the system can find themselves on their own, without a plan, and possibly without a home. 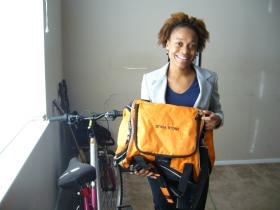 20-year-old Gi’Nia Stone doesn’t think much of the holidays.  “They can either bring back bad memories,” she says,  “or remind you that you don’t have any memories, and that you know, you’re alone.”

Stone grew up in the state’s foster care system after being neglected and abused in her mother’s and grandmother’s care.  Since age six, she was in and out of at least 30 different homes.

Despite the fact that she was smart and focused on learning, she never felt supported.

“This whole time I felt inadequate I felt sad, I felt like I couldn’t do anything right. I felt like they would always tell me, people who I thought loved me, the people who were supposed to love me, parents, grandparents, teachers, even mental health officials, I felt like they were not doing their job and not helping me like they shouldn’t have been.” And she adds, “I really did feel like a paycheck to a lot of people.”

Stone’s story may be unique, but she is not alone.

Kathy Herron, Deputy Director of the Department of Family and Children’s Services, says there are some 8200 children currently in Foster Care.

“Government can’t be everything to all children.”

Many kids she says are placed in loving, stable homes, sometimes permanently.

But, others, with stories similar to Gi’Nia, ‘age-out’ of the system when they reach 18, legal adulthood.

And many become homeless.

Though they try to prepare kids make future plans, Herron says many are not ready to go out on their own.

“Unfortunately, our youth don’t necessarily have a safety net, or have a program or people who have built a relationship with them that will be understanding, supportive, that will help them guide their path, help them make decisions about what’s in their best interest.”

Which is where the ‘Orange Duffel Bag’ hopes to fill in the gap. 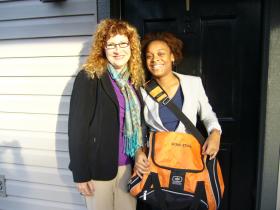 The non-profit offers a 12-week, life-plan coaching course and ongoing advocacy to homeless youth and kids aging out of foster care. Echo Garrett is co-founder and chair of the foundation.

“We get down to the real nitty-gritty of what they want to do with their lives and how they’re going to achieve that goal educationally.”

The Orange Duffel Bag program is based on the book of the same name, co-written by Garrett and Sam Bracken, a young man who was homeless by age 15, yet, went on to earn a football and academic scholarship at Georgia Tech.

Everything he owned  fit in his orange duffel bag.

“We like to think that the Orange Duffel Bag has become a symbol of hope for kids who are struggling.”

Garrett explains that Bracken’s story of overcoming adversity, and his seven rules for the road, are the core of their program.

“The seven rules for the road are a transformational change process and that’s what we take the kids through. It starts with awareness, understanding.”

Understanding about desire, meaning, choice, love, change, and gratitude. But even moreso, says Garrett, they give the young people a safe place to tell their stories.

That safe place had an immediate impact on Gi’Nia Stone, who had no idea what to expect when she entered the first pilot program.

“The minute the introductions started,” says Stone, “I knew this was an amazing place to be.”

For the first time in her life, she says she had faith. “I’d never been in a situation before where people so positive and willing to help. Another thing about the Orange Duffel Bag, they were saying they were going to be around for us, for as long as we needed them. In care, everyone says when you’re 18, 18,18, bye, basically.”

Since 2010 more than a hundred kids have successfully graduated from the program. When they do, they get an orange duffel bag, filled with a fully loaded laptop.  And they continue to have a family of advocates to help.

Which has indeed, been transformational for Gi’Nia Stone. She’s now in her third year at Agnes Scott college and plans to become a pediatric neurosurgeon.

“I feel like any moment alone I could’ve given up,” says Stone.  “But knowing I had Orange Duffel Bag, even for the smallest things, they were always there to pick me up, even before I fell, before I could give up, they were always there to remind me, don’t forget, we’ve got our eyes on this goal, we’ve got our eyes on this prize, we’re here to help you, we got your back.”