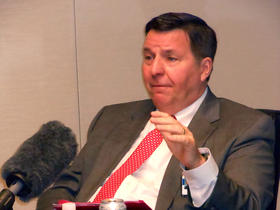 After 16 years leading Emory Healthcare, CEO John Fox will depart Atlanta for a new job with Beaumont Health in Detroit.

In a wide-ranging conversation with WABE’s Denis O’Hayer, Fox recalled his decision to accept the first Ebola patient in the United States, Dr. Kent Brantley. Two questions were critical, Fox said. “Can we really make a difference for these patients?” and “Can we do it safely?”

Fox said it is critical to document and learn from current experiences, and he described the “viral” response to Emory’s information-sharing efforts through online educational videos and materials.

Fox stated that federal policy must address resource needs if the U.S. is to be prepared for similar epidemics in the future. He highlighted the “megatrend of international travel” and the heavy use of antibiotics as factors that make this risk a real possibility.

Fox is also the chairman of the Georgia Hospital Association.

Fox said the organization has developed a plan for the state of Georgia to go ahead with Medicaid expansion ─ something it has so far refused to do. But Fox acknowledged the “highly charged political question” of paying for it over the long term. Fox called the U.S. health care system “the last of the dodo birds” for not having a meaningful solution to the problem of people without health insurance.

(Note:  In the expanded version of part two, Fox also talks about the future of Emory Healthcare, which is a complicated mix of teaching institution, mainstream hospital and healthcare system.)