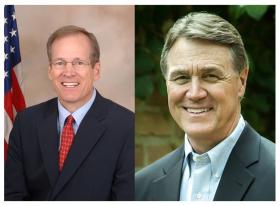 Businessman David Perdue and Congressman Jack Kingston are in a runoff for the GOP U.S. Senate nomination after capturing the top two spots in the crowded primary.

Kingston trailed Perdue in Tuesday’s contest but says he can catch up, while Perdue says he doesn’t plan to change his campaign strategy going forward.

Speaking after his victory speech Tuesday night, Perdue said he’ll continue to focus on the national debt as his main issue in the nine weeks between now and the runoff.

“I know we’re on the right track,” Perdue said. “I know our message is resonating, and I just think we’re going to stay the course. We’re going to continue to hopefully debate the issue of the day, and that is the crisis that we face. This debt crisis is real. It’s here right now, and it’s deadly serious.”As heard on the radio

The former Dollar General and Reebok CEO topped the six other candidates, capturing about 30 percent of the vote.

Throughout the race Perdue painted himself as a political outsider, though he is the cousin of former Gov. Sonny Perdue. The Senate hopeful continued to push that message after his win Tuesday.

“I’m still an outsider. I’m still the underdog. I’ve never done this before. And I’m standing in a place no one thought we’d be standing,” he said.

Despite finishing the race a little less than five points behind Perdue, Kingston told WABE he’s optimistic about his chances in a primary runoff.

“It’s not that big of a gap,” he said. “And if we look at it historically, the second place finisher always fairs very well in the runoff.”

Kingston edged out former Secretary of State and Tea Party favorite Karen Handel to clench the final spot in the runoff. Congressmen Phil Gingrey and Paul Broun, along with engineer Derrick Grayson and attorney Art Gardner, were also nudged out of the race.

The Georgia Senate race is seen as a key to Republican hopes of reclaiming a majority in the Senate, as they’ll need to maintain the Georgia seat while also picking up six seats currently held by Democrats.

Both Kingston and Perdue fit more along the lines of party-establishment candidates rather than members of the Tea Party. The Savannah Congressman of 22 years is seen as a career politician who has the backing of the Chamber of Commerce, while Perdue has been painted as a wealthy candidate with ties to big business.

Georgia State University political science department lecturer Steve Anthony said he believes the outcome of the runoff will depend largely on which candidate can get their voters to turn out again.

“Jack has a greater number of people to get back out since he’s behind, but that can be mitigated if Perdue doesn’t get his people back out.”

Anthony said voters can expect a bitter two-month battle between the two candidates.

The runoff is scheduled for July 22, the winner of which will face Michelle Nunn in the November general election.