Westside Works is a job training and community development program located about a mile from the site of the new Atlanta Falcons stadium. It’s supported by the Arthur M. Blank Family Foundation.

“A Closer Look” recently visited Westside Works and talked to some of the people living near the stadium in neighborhoods that have drastically changed over the decades. 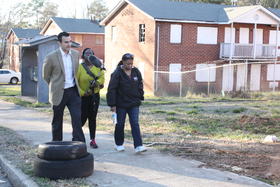 Broadcast version of part 1 of the series about Westside Works job training and community development program.

Frank Fernandez is vice president of community development for the Arthur M. Blank Family Foundation. He acknowledges that residents have been made promises before when the Falcons’ current stadium, the Georgia Dome, was being built. 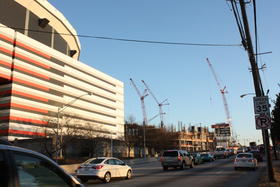 Broadcast version of part 2 of the series about Westside Works job training and community development program.

The community is in Atlanta Police Department’s Zone 1. According to APD crime stats, in 2013 there were 26 murders, last year 27 and so far in 2015 3 homicides. Boarded up, burned out and trash infested areas are common sight in these neighborhoods.

But with a $15 million commitment from the foundation and another $15 million devoted to the community through the Westside Tax Allocation District, it’s clear that major changes are coming to English Avenue and Vine City. What’s not clear is whether or not many residents will be able to stay.