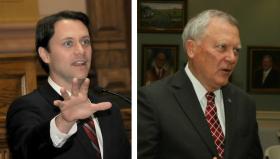 The poll, which was conducted in the two days following last week’s primary, puts Carter ahead 48 percent to 41 percent, with seven percent still undecided. Previous polls have shown the candidates either in a dead heat or Deal up by a few points.

”You take an average of these polls. Deal’s running in the mid-40s. That’s a weak showing for an incumbent. That indicates vulnerability. Yea, Deal could certainly lose this contest,” said Black.

But Black stressed it’s far too early to jump to conclusions.

“Look at Carter’s situation. He had no opponent in the primary. He didn’t have to defend his positions. He didn’t have people saying bad things about him. This is a period where Deal has been under attack. Carter’s gotten off without anything,” said Black. “That will change as we move into the November cycle.”

Deal said he doesn’t comment on polls, but feels good about where he’s at. He cited his win in last week’s three-way primary as evidence he’s heading in the right direction.

“I thought that the victory in the primary was a rather overwhelming margin and those were two credible candidates. I don’t think anybody should take them for granted as not being someone that could have mounted a good campaign,” said Deal.

That despite Deal’s camp in the past repeatedly dismissing his challengers as less than stellar and Deal refusing all debates leading up the primary.

“Candidly, there are certain folks who are candidates for the sake of being candidates. They just want their name on the ballot,” said Evans.

While Deal touts the fact he received roughly 75 percent of the primary vote, Carter has framed that number differently, saying one in four Republicans voted against their sitting governor.