The North Atlantic right whale was hard hit by whaling.

That industry is gone now, and the right whale population is creeping back up. But it’s still small; there are fewer than 500 North Atlantic right whales on earth.

The whales have their calves off the Georgia coast, and the federal government is proposing to protect more of the whale’s habitat there.

“Down here in the Southeast we know a key conservation objective is successful calving,” Barb Zoodsma, a biologist with the National Oceanic and Atmospheric Administration, or NOAA, said.

Her agency is proposing to expand the area that’s considered critical for the whales.

Right now it only includes waters off half of Georgia’s coast and northern Florida. NOAA wants to stretch it all the way up to Cape Fear in North Carolina. It would also expand critical habitat in New England.

Zoodsma says critical habitat means making sure the conditions the whales need to raise their young are in place: Calm seas with a certain temperature and a certain depth. 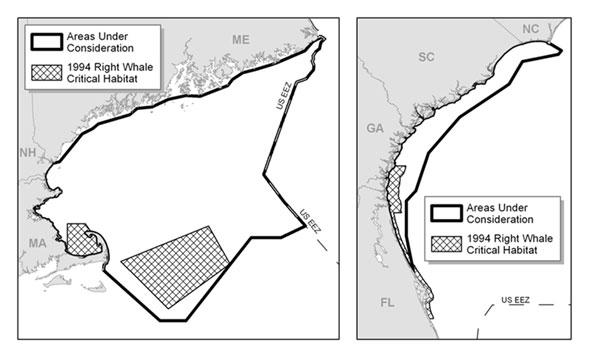 What it does do is require projects to get sign-off from NOAA to make sure they don’t interfere with the habitat.

That could raise issues for the oil industry. The Bureau of Ocean Energy Management (BOEM), which is part of the U.S. Department of the Interior, recently said it would consider opening parts of the Eastern Seaboard for offshore oil exploration.

“If the new critical habitat proposal is finalized, it certainly will be considered,” BOEM Chief Environmental Officer Bill Brown said. “But it is not possible at this point to comment with any certainty on what the effects of such a designation might be.”

The proposal to expand the habitat is open for public comment until April 21.