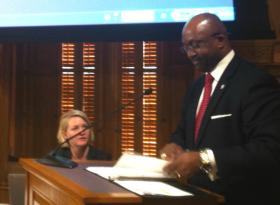 No legislation has been proposed yet, but ongoing budget hearings at the Capitol give some insight into what a reform package may look like.

“Less confinement and more community-based options requires that we put some money out there,” said Deal.

Any new legislative package will likely include elements of last year’s failed House Bill 641, which  sought to overhaul the juvenile code.  The bill passed the House, but died in the Senate.

On any given day, the Department of Juvenile Justice supervises between 12,000 to 14,000 youth offenders. About 1,700 of those are housed in detention centers, at an annual cost of about $90,000 per offender,  more than what the state spends on adult inmates.

Juvenile Justice Commissioner Avery Niles says one of the key elements of a reform package is providing more sentencing flexibility to judges.

“It’s essential we are making sure our low-risk youth are in a program that fits their particular crime. Those are things that will prevent youth from coming to us.”

Data shows 65 percent of youth offenders released from detention centers will make their way back into confinement within three years of release.

“We’re locking up a lot of kids that could be treated in the community,” said Jackson. “That’s the goal of part of this [overhaul] is to treat them in the community. Rehabilitate them and don’t let them have the stigma of having been locked up.”

Governor Deal is expected to introduce the reform package next week.