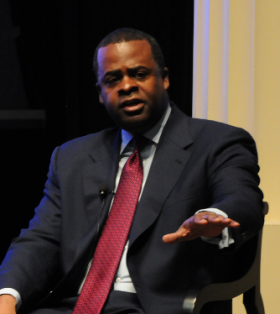 Atlanta Mayor Kasim Reed wants the community benefits process related to the new Atlanta Falcons stadium wrapped up by the end of the year, despite protests from neighborhood leaders and City Council President Ceasar Mitchell.

Since July, the city and the neighborhoods have worked on a formal plan to revitalize the west Atlanta area. The plan must be complete before $200 million in city funds can go to help build the new stadium.

Reed wants the plan done so his staff can move on and construction can begin on time.

“We already lost all of the slack in the construction schedule honestly because of the negotiations with the churches,” said Reed.

Neighborhoods leaders, however, say the plan is still far too vague to approve.

At last week’s explosive community benefits meeting, neighborhood leaders were stunned to learn the plan they had been working on for months was already making its way through City Council for approval.

Reed staffer Katrina Taylor Parks defended the move as a necessary procedural step so the committee could wrap up its work by the end of year.

“Why didn’t you tell us,” interjected committee member Demarcus Peters.

“You can read. We’ve said this all along,” said Taylor Parks.

“Your tone is disrespectful to the community,” said Peters.

Council President Ceasar Mitchell said the process was being rushed and the neighborhoods were getting “bamboozled.”

“I’m not going to be a part of the council president’s show. I think that that was Kabuki theater.That’s his right as an elected official to do so I’m fine with his opinion. Obviously I disagree with it. This has been an exhaustive process,” said Reed.

Reed said he’d work with the committee so the City Council can vote on an approved plan by Dec. 2, its last meeting before holiday break.

A committee meeting is scheduled for Monday at 5:30 p.m. Reed plans to attend.